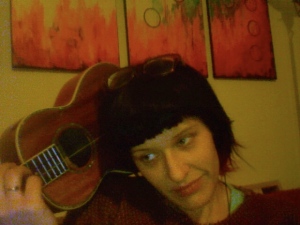 Could not find a properly fitting picture, so I just took one of me and my uke. It is 3:31 am. Ode to my lovely uke. (Thanks, Dad!)

For some reason, I just typed that and fell in love with that number.  39.  It seems so big!  (Yet I know, as someone reminded me just the other day, that I am only over 10% finished!)

I don’t have a lot to say about this song except for I really have no idea where it came from.  I was walking around the my new uke cooking spaghetti and just started plucking the uke part… I searched for a melody and there it was.  (Some of my stronger songs have been written doing totally random things like driving, showering – especially showering – or even at a show, which is terribly inconvenient!)

I will say something about the construction: it’s not totally finished, I think.  I have yet to decide how and where things go.  I actually had put in a tiny instrumental, but it’s 2:30 am and just don’t have the time or means to develop it properly, so I’ve temporarily removed it.  The cello parts that are there already are totally slack and weird.  I was playing so quietly so my neighbors didn’t hear me.  But I really wanted to include some instrumentation for you and for me to give an idea of what filler might be.

I oddly feel like I didn’t write this song, though I know I totally did.  I know that’s weird, but I will say that it’s an unusual form for me melodically and technically.  The melody in each verse is the same, which I usually stay away from: I like variation and color change, but this seems very balanced.  Each verse and chorus is sung the same, which almost drove me crazy, but I did it anyway.  I couldn’t find a bridge… maybe there is one already with an instrumental?  I don’t know… we’ll see.  Generally, I think this song needs some structure and work with the vocals and their direction.

Writing:  This was such a strange experience.  It came naturally and from almost nowhere.  I have no open explanation to give you, though there are some deliberate verses and a few personal impressions I was left with afterwords.  One that was quite deliberate : “He’ll boast his badge… ”  I have had an interesting conversation about gentrification and racial relations today.  I think it made me a bit irritable, actually, but it’s interesting, nonetheless.  I was talking to this same friend about how some people wear their intellectualism out so everyone can see it, and how it’s annoying to me only because I don’t have the best intellectualizing skills.  (My friend was concerned I thought he was one of those people.)  I’m an emoter not a debater.  I was always so jealous of those dumb smart kids in school, and funny, they were always in debate or math club.  (Emoter: Is that even a word?)  Used the rhyming dictionary, dictionary and thesaurus…I love it.  I use it.  You should, too.  Knowledge is awesome.

Recording: Uke and vocals are done live and took the last of three takes.  Three cello parts: plucked and 2 with bow done very quickly.  This uke rocks!  I love it!

One last problem: I don’t have a title even as I’m nearly about to post this… I will just have to make one up or go the normal way and take it out of the chorus (gross!).   The title I’m choosing I don’t like, but I need one.  It will change… but I dislike “The Way God Made Me” for a title even more… hope you are well.  Thank you for listening!

Headache for a Heartache

Blame it on the way God made me

Long ago, a demon took my headache

Dug a hole and placed it in my heartache

Please take it out of me

What would you know about it anyway?

She holds her breath and calculates the intake

Binds it there and leaves it for a keepsake

He’ll boast his badge and pin it to his waistcoat

Homeward bound, he’ll trade it for a banknote

Try, try to intellectualize that

What would *I know about it anyway?

Mark the space with oil and with water

Is that all you have to show for it?

*How would I know about it anyway?

[*What would you know]

Blame it on the way God made me

Here to say it’s the way it has to be

You’re all that I am after

*How would you know about it anyway?

*for posterity I’m making a note regarding lyric changes to this song as of 12/10/12.  As it is performed now (when it is performed), chorus line is “How would you know about it anyway?” every time and there are some slightly older versions with the third verse completely omitted.  As of today, the future of this song is still undecided.